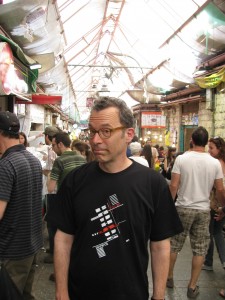 JON LASKIN has more recently gotten involved in the great adventure of digital video, after performing in theater, film and “old” analog video for many years both in his native New York, and for a nine-year stretch in Los Angeles.

Favorite performances that come to mind include Dick of Death, on stage and on video, Tales of a Hydrogen Starbomb on stage (and soon to be a DV feature), The Devil with Boobs (a Dario Fo play Jon translated from the Italian for its American theatre premiere), the video shorts Terraces and The Auction House, and the short film Ashes to Ashes.

Jon has also translated, produced and performed in several works by Italian playwrights including Luigi Pirandello, Eduardo De Filippo, and Manlio Santanelli, and hopes to bring versions of these and other works to the digital screen.

MICHAEL AQUILANTE believes that throughout the moviemaking universe, there is a common and divisive idea: Movies are one thing, and live theatre is another. As a multidisciplinarian artist, he is uncomfortable with this zero-sum dogma, and is too excited by fusion in the arts and prefers working across planes.

His earliest works as writer/director were for the stage, and his plays tend to be more cinematic through shorter scenes and more movement in time and location. His screenplays tend to be more theatrical, featuring characters who enjoy using elaborate language even when, say, driving a cab.

Prior to writing/directing goddog, Michael wrote/directed two short videos: Terraces, the comedic tale of a young man looking for the perfect terrace from which to leap, and On Italian Time, a dialogueless drama about a young man who finds himself lost in Italy on the fateful September 11, 2001.

It fast became a cliché to say the world, especially America, changed after September 11. In truth, America has yet to unravel its feelings about what happened that day. It’s not easy to sort out anger, hate, pity, and grief all at once. As an artist, Michael still struggles with his own reactions to that horrible event, and to its continuing aftermath and expansive ramifications in every facet of collective American life, collective global life.

That struggle led Michael to write/direct goddog, a movie that tells the story of three men whose lives parallel the events leading up to and continuing past September 11. In the tradition of My Dinner with Andre, goddog is essentially one long conversation, at first between two men, then three. Set almost entirely in a mountain cabin and over the course of a weekend, male chatter and banter steadily evolve into violent conflict over illusions, delusions, and betrayals. If men can create comfortable lies to shield themselves from terrifying realities, so can nations.

Since September 11, America has tried to remain vigilant and alert to realities of which we were forced to become painfully aware. But vigilance is exhausting work, even when one’s life is threatened. We nod and doze from one frightening event to the next, wondering when, where, and whom terrorists will strike. Yet many of us remain incomprehensibly concerned with the welfare of our mortal enemies. This should be a fertile time for artistic imagination and the raising of voices from both sides of the equation, but the artistic community has so far failed to express and reflect the full gamut of ideas spawned by September 11.

Michael’s next independent feature, and others after that, will continue to focus on the lesser discussed aspects of America’s struggle to remain strong enough to sustain its own hard-won freedom, a brand of freedom that the rest of the world finds difficult to understand yet completely irresistible.